The goal of the company nowadays is to maintain the leading domestic position in beef production acquired over many years, as well as to effectively expand the market by expanding the product range with processed beef products. Expanding export markets is also a priority.

Mikofami Kft. was founded 30 years ago, on May 29, 1991. In the beginning, there were only commercial activities - the owners founding the company exported live cattle from Hungary to Italy. To meet their partners’ needs, bone-in beef quarters have started to ship abroad.

The export of Hungarian beef meat, which is extremely valuable on the Italian market, became uncertain in 2005, when Zalahús Zrt. – the company providing slaughtering service –, went bankrupt. MIKOFAMI Kft. leased Zalahús Zrt.’s plant from its liquidator, so the previous activities could continue without interruption. However, it became clear that this step will not provide a definitive solution for the future business. The owners of the company decided to build a new cattle slaughterhouse in frame of greenfield investment, as there were no other slaughterhouses producing beef meat for export in the western counties of Hungary.

The new plant was handed over in 2007 and achieved the absolute frontline of the Hungarian beef market soon thanks to the most modern technological equipments and unique two-floored design. The company's activities in the new slaughterhouse have been constantly expanding: on the sales line due to the successful market acquisition and by increasing the purchase volume of livestock. From 2008 there were continuous expansions in order to increase production and sales volume beside cost reduction. Funds accumulated over the years were invested into necessary improvements: corrals and car park were expanded, the refrigeration and freezing capacity was increased, and a new, self-developed ERP system was implemented. In the spring of 2014, a fire broke out at the slaughterhouse. Huge damage arose in the building and the technology too. Production could not continue. For the transitional period while the plant was under reconstruction, production was managed in Jászszentandrás. In October 2014, the restoration of the plant was completed. Despite of the difficulties Mikofami Ltd. was able to maintain the markets and the production could continue without disruption. 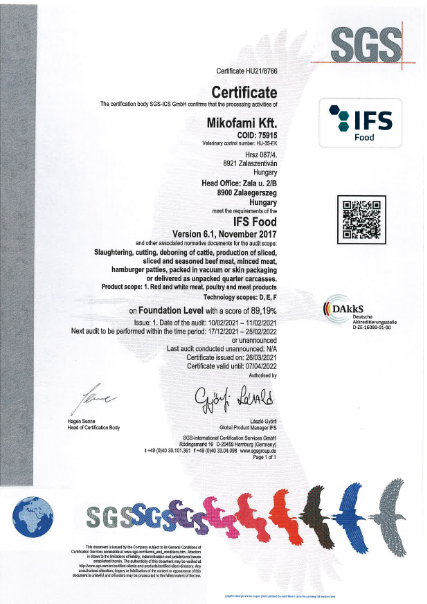 Our site is using cookies to improve user experience and to maintain our statistics to help us to stay relevant to our users. For more informations let's check out our data policy.

This category contains cookies that are necessary for the browser to functioning correctly and also contains practical cookies that are helping our users to have a smooth experience during the act of browsing on our site. The default browser cookies' functions are limited to the actual browsing session. At the end of the actual session they will be deleted automatically. Practical cookies let our users to save their previously made settings on our site, to make their overall user experience more fluent and enjoyable with saving their preferences for the following sessions. These cookies help to create a better user experience until their automatic expiration date.

We are trying to get a sharp image about how our customers using our site to make it possible for us to provide more relevant informations to them. The statistical cookies gives us feedback about how many customers are using our site and how are they getting into interaction with it.

Marketing cookies are making it possible to get a full image about user interactions through multiple websites. With this procedure the overall goal is to provide the internet users comprehensive relevance in all of the commercial kind of content that they would experience during their browsing activities. These cookies make it possible for the users to do not be bothered by irrelevant advertisement during their browsing experience related to various platforms. Instead, these cookies helps marketers to place personalised and relevant content in the way of these users. Marketing cookies are helping the personalisation process of the browsing experience.